Graduate from Design School Kolding.
Founding member of Gimle Studio in Copenhagen 1980.
Since 2006 he has collaborated with national museums using comics to visualise the lives of people who went before us: Iron age tribes in East Jutland, Saints from Jacques de Compostella to Santa Claus, Seamen in the Caribbean, crusaders, carpenters and  scientists alike.
This work earned him the Hanne Hansen award in 2014.

Ørsted. He electrified the world

NEW! 2020. One spring day in 1820, during a lecture, the Danish physicist Hans Christian Ørsted allowed a current from a battery to pass through a platinum wire that lay across a compass – and the compass needle moved! Ørsted had thereby demonstrated the link between electricity and magnetism, which is what now allows us to turn on a light, talk on the phone or take a drive in an electric car.

Hans Christian Ørsted is one of Denmark’s greatest natural scientists, and this comic book is being published to mark the 200th anniversary of his discovery of electromagnetism. This is the story of his life.

Ørsted. He electrified the world is an 80 page graphic novel written and drawn by Ingo Milton and Sussi Bech in cooperation with Jens Olaf Pepke Pedersen from the Danish National Space Institute. 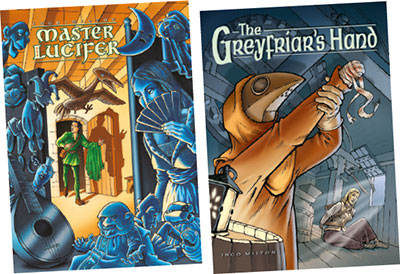 Set in medieval Denmark AD 1450. Three travelling puppeteers are invited to perform at a castle. They meet a knight returned from Constantinople with PTSD and his estranged sister. In book 2 they try their luck at the clandestine trade in holy relics. 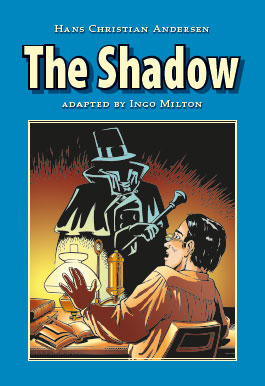 Hans Christian Andersen’s little known, eerie fairytale about a young scholar’s struggle with the dark side of his personality in a world that favours superficial glimmer and scandal over
substance.
Written in 1847 the story is surprisingly relevant today. 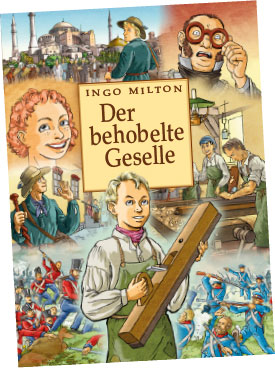 This ‘edutainment’ comic is created in collaboration with Denmark’s Village Museum and based on memoirs of a carpenter apprentice around 1850 and his travels in Europe as a journeyman.
We learn secret rituals and workings of the Trade Guilds at the time.

Sample page from “Ørsted. He electrified the world”.